May 03, 2019
With the bank holiday weekend about to start, think about The Centralian Players working hard to build their next set for Peter Gordon's play, Third Week in August, while you sun yourself on the beach, enjoy your BBQ and refuse to let the Great British Rain Off stop you enjoying the break.

We are now only two weeks away from opening night, with the production being presented on 15, 16 and 17 May, so it will be all hands to the deck for members in order to build the caravans, grow the bushes and paint the sky - preferably blue, instead of British Grey!!

The play follows six characters all visiting a run-down campsite by the coast and how their relationships develop - friends or otherwise!  Sue just wants a 'get away from everybody' holiday, but didn't count on inadequate caravaner, Neville who, when not battling his wife, has to deal with his difficult sister-in-law.  Then enthusiastic Tony arrives with his complaining girlfriend, Jenny, reluctantly in tow and things start to get complicated, so Neville decides a communal barbeque is required... 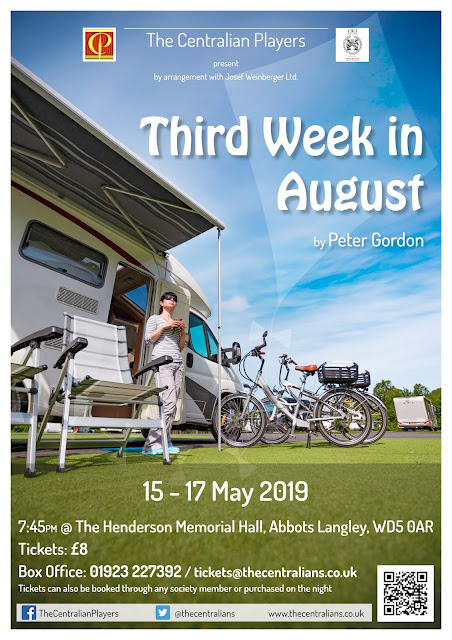 Tickets are available now from the Box Office, either by calling 01923 227392 or by emailing tickets@thecentralians.co.uk; there will also be tickets available on the door if you are more spontaneous.  As usual, tea and coffee will be available at the interval and Henderson Hub staff will be manning the bar for those who would prefer something a little stronger.  Doors open at 19:00 and the show will start at 19:45.

If you have never been to one of their productions, the show will be presented at The Henderson Memorial Hall, High Street, Abbots Langley, with a large car park available that has more than enough spaces.

For those of you who are regulars to their productions, you can be forgiven for thinking The Centralian Players have got the dates wrong, but they are correct for this production.  On this occasion, the final round of the FA Cup will be dominating the weekend, meaning that audiences and members alike will be distracted by Watford FC's performance.  So, the shows on this occasion will be Wednesday to Friday; if this proves popular with audience members, then this will be considered as a permanent adjustment for future productions.  What are your views on this?  Feel free to let them know on their Facebook page or Twitter.