Showing posts from October, 2008
Show All

October 13, 2008
Have you ever wondered what a cross between Simon Pegg's Shaun of the Dead and Run Fatboy, Run would produce? No, me neither, but today I discovered what the result could look like as RoadRunner* kindly pointed out that the pics are in on the Great Run website, so now the world and his mum can see the full horror for themselves! Number seven says it all really... * Unfortunately, RoadRunner has stopped blogging, but you can still check out her pics with race number 35018 ;-)
4 comments
Read more 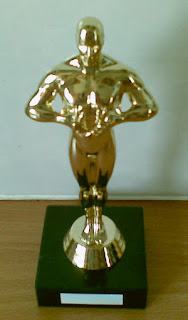 Well, the curtain has been called and the set dismantled for another three-and-a-half months as our production of "A Murder is Announced" closes with a record audience number of around 130!! Henderson Hall is not a particularly large place and we generally have a maximum audience of 100, but due to so many advanced bookings for the Friday and Saturday nights, we had to put a couple of extra rows out.  Everyone has been astounded :-) I think it is safe to say that everyone felt Saturday night's performance was bugged by a few little gremlins, but everyone took it in their strides and the feedback from the audience was that it was a very enjoyable production, so smiles all round! As a way of saying thanks to the cast and crew, the producer managed to sneak some little gifts up to the dressing room for when the play closed and we all piled in full of the highs of a complete production ... I now have my very own Oscar!  LOL My first ... and final ... 'Oscar'!!
Post a Comment
Read more

October 10, 2008
Whoever coined the phrase "Out of the frying pan and into the fire" wasn't far wrong! No sooner am I back from the Great North Run than I am straight into final rehearsals for the next production by the Centralian Players , "A Murder is Announced", a fifty-year celebration for one of the group's members. Fifty years! That's a long time to dedicate to a hobby - I usually get bored after just a couple! :-) After three days of technical rehearsals that ranged from absolute disaster* to pretty good run-through, we finally opened last night and that's when the nerves finally hit. Its fine when its just the group of you that learned the script together, but add an audience to the mix and my stomache suddenly starts somersaulting like a clumsy trapeze artist. In fact, its starting its little routine again as I sit here typing this! Andrex is making a mint out or me right now. * Tuesday's technical rehearsal was the worst to date. That said,
Post a Comment
Read more 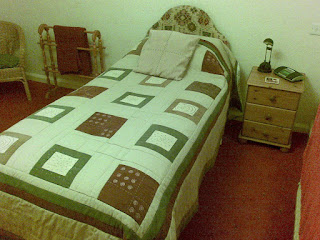 Okay, not so much fatboy as love-handle boy, but the Great North Run 2008 was still a challenge! As per usual, I was a little late booking a place to stay but was incredibly lucky to find a characteristic little guest house called Bush Nook about a month beforehand, situated along the A69 between Carlisle and Newcastle. My little bed - very comfy! Slept like a log! The shower/toilet room - where I broke the flush :-$ Some of the room's character :-) Due to the bad weather on the way up on Saturday, I was rather late arriving and the owners were starting to wonder if I would arrive at all. I did ... seven hours after I set off. I know I'm not a speedy driver, but that's a long time even for me. The forecast was that there would be showers on the Sunday morning, so I had made sure that I had a suitable running jacket. I didn't need it. When I opened the curtains first thing Sunday morning I was greeted with a view that made me long to live in the hills: Im
Post a Comment
Read more
More posts