April 12, 2010
When I first announced back in February that I had gotten through the general ballot for this year's Great North Run, the first question I was asked - with distinct undertones of irony - was when I would start training.  Still bouyed by getting through the ballot and raring to go, my immediate response was, "Next month!"

It's been two years since I last ran anything more than a flight of stairs, so why I thought I could run a mile with any ease is beyond me.  Whilst my legs seemed not to worry too much about the exercise, my chest and lungs were screaming to be set free from my chest: now I know how John Hurt would have felt had the chest-burster Alien been for real ... and I don't think the Ventolin would have been any help, either!

It didn't really bode well for getting off to a good start with the running, but at some point between the test run and my first proper run on Thursday, my body seemed to realise what I was trying to do - much like Paris Hilton finally catching on to a joke - and let me run nearly 3 miles in 26 minutes: I was well chuffed :-)

However, I'm now only a couple of runs into training and already the youth abuse has started with some young female thing shouting "Minger!" out of a car at me as she went past.  Well, yes, and your point would be?

Then again, I was jogging along minding my own business and you were shouting abuse at a stranger, so who's the real minger here?


* * * * *
Something I have been meaning to do since the beginning of the year is step up the photography practice.  To help me out, I agreed with TinkerbellTinks to take pics of her and her daughter, to try and build up my confidence and experience taking portrait photos.

As you might expect, it took a little while to get things off the ground but this weekend, we finally got together for a photo trip and popped up to Whipsnade Wildlife Park where we got a little more excitement than we bargained for: 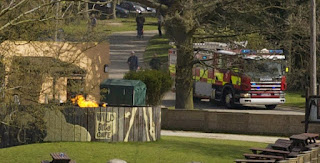 Yup, the Wild Bite Cafe BBQ got a little on the hot side as something went wrong with one of the gas canisters and the whole thing caught light.  The first we knew about it was one of the other mother's shouting to us to get back as the canister was alight and was going to explode.  It didn't, thankfully.  Of course, the only thing TT could think of was whether or not the firemen were cute.  Typical woman!

Tim said…
The running soon deserts you if you don't keep it up - I find that a couple of weeks is all it takes for my abilities to disappear!

OddThomas said…
*Almost* getting into the swing of it - I haven't run since Tuesday and over-indulged today, so I think Sunday is going to be like starting from scratch again :-|
16/4/10 22:26