July 16, 2010
I would be the first to admit that I don't get out much at weekends beyond a relaxing visit to the local coffee shop; not because I don't want to, but because I don't even think about it until I reach the weekend, by which time it's too late to get up to anything interesting.

That's not all that far, I thought, just a few miles down the road from my parent's place ... and when would I have the opportunity to see Starbuck / Templeton 'Faceman' Peck in person again?  It will probably never happen, so how could I possibly say no?!?!

Except, of course, that I don't know my Truro from my Taunton and what I thought was just a few miles down the road was actually a fair bit further ... about 150 miles further!

Still, there was something attractive in the utter randomness of heading to Cornwall to enjoy some theatre culture; that and there's a reputation for being a bit odd to uphold!!

So, with a brief stop-over at my parent's on the Friday night, we arrived in Truro with about three hours to spare, more than enough time to have a little trundle around.  In fact, if we'd only had an hour to spare, there would still have been more than enough time: Truro didn't exactly have a lot going on beyond the obligatory Weatherspoons pub and a number of odd locals, so we holed up in a bar until it was time to head into the theatre.

Whilst I have known for a while that BB is a huuuuuge 80s fan, especially for the first Back to the Future film, it wasn't until the journey down that I discovered just how much of a geek fan she is for The A-Team: at the very least, it matched my geekiness at the peak of my Trekkie phase.  That said, I don't remember playing Star Trek in the school playground...

By the time we went into the theatre, BB was hyped up at just being in the same building as 'Faceman' and had a grin plastered across her face like the Cheshire Cat from Alice; I half expected her to disappear and leave a giant grin floating over the chair next to me, whisper-squealing that her childhood heart-throb was right here in front of her.

As plays go, it was very enjoyable and, as you might expect, Dirk was most definitely the star; not just because of who he was but because he put on a very admirable performance as Columbo, as played by Peter Faulk.  For me, the only thing that let it down were the scene changes, as they were far too long in order to shuffle the scenery around for the different locations.  Unavoidable, I guess, as the set was very good, but it kept breaking up the rhythm of the production so it was a bit frustrating.

Once the play was finished, we quickly exited and made a beeline for stalker's corner the stage door, along with all the other number one fans, ready to meet the man himself.

I think they must plan what order they're going to come out in, as all of the other performers left the building first, leaving Dirk to meander out several minutes later to take all the attention.  That must be really annoying for the other actors when they're performing with a cult figure, as they got pretty much no attention when they came out!

I must admit, I'm guilty of not approaching any of them ... but I didn't approach Dirk either, so I don't feel so bad.  So, in a nod to everyone that was performing that night, here's a quick cast list:


In case you are wondering, you did read that right: I did not approach Dirk Benedict.  I drove 300 miles to see him on stage and here was an opportunity to actually speak to the man, and all I could do was stare at him like a rabbit caught in the headlights.  However, seeing BB finally getting the chance to meet her heart-throb, have him sign her A-Team storybook and convince him that he really did want to have a photo taken with her (it took playing the London card to convince him!), I finally got a move on and took a pic with my own camera: 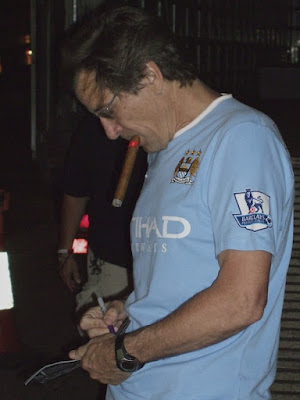 All I can say is, thank you, Dirk.  You made BikerBetty's night and made sure I stayed awake for the drive home, as she chatted about it the whole journey!