March 03, 2012
Somebody once told me that university is fun and that you spend half your time having a laugh.

I've had jobs where I've worked twelve hour days for months at a time which look like part-time jobs by comparison.  Unfortunately, the amount of work we've had to do has meant that there are so many people I haven't seen since before Christmas and, thanks to closing my FarceBook account, people whom I have unwittingly lost touch with.  So, when an opportunity presents itself to see everyone all at once, it's hard not to take it and is certainly one I was looking forward to tonight.

This week my friend, Tink, hit middle age with a bang and has been organising a party at her local.  Since cakes are a major addition to any half-decent party, she asked me to whip my butter into a creamy taste-fest ... I'll find out later if it's palatable!

Anyhow, the request was for fifty cupcakes with a "Black and White" theme.  Unfortunately, this meant I had to use my imagination and creativity.  Trouble is, these are two areas where I'm a bit lacking, so I ended up concocting these little artery-blockers: 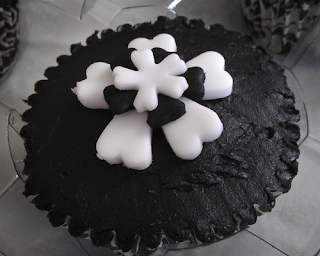 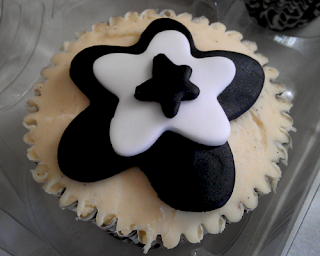 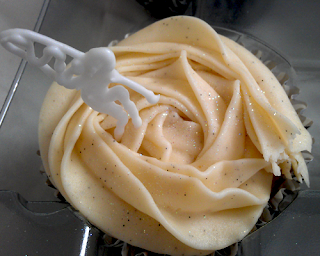 White buttercream 'flower' with 'fairy' - yes, that is meant to be a fairy! 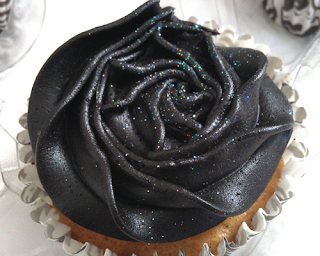 So, nothing particularly interesting or appetising.  However, if you're feeling a bit goth and would like to know how to create black buttercream, check out Wilton's page on How to Make Black Buttercream Icing (I didn't use their buttercream mix, but did use the principles there).

So, the cakes were all delivered to the pub this afternoon and the party is now starting as I type this post, sitting here in the university library, hoping they like my creamy stuff.  Can't say I'd be tempted, personally.