The Centralians are back with their Autumn production, Prescription for Murder, which is running until Friday, 18 October 2019.

Dr. Richard Forth is a busy man in Bere Knighton with a hectic work life, an awkward relationship with an old girlfriend and with a wife, Barbara, who is constantly ill.  When a stranger arrives claiming to know Richard's second fiancee - someone he claims not to know - Barbara's health worsens ... and she is not the only one.  With bad luck spreading as quickly as bad news, it seems someone is trying to kill Barbara, and anyone else who stands in their way. 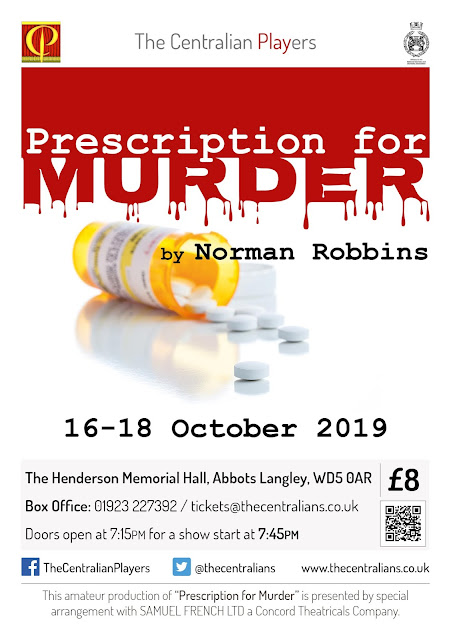 Tickets are selling fast, so it is a good idea to book, though there will always be some available on the door if you decide to come along last minute.

And yes, yours truly will be appearing in this as the stranger.  The script called for a good looking young man, but we've had to go with what we have instead, so if anyone wants to join us, feel free to speak to a member of the society!!