June 08, 2007
In those infamous lyrics of Simon and Garfunkel:

"Slip sliding away, slip sliding away
You know the nearer your destination,
the more you slip sliding away..."
And why, you may ask, is this tune at the forefront of my mind? Because it happened to be the first thing I thought of as I disappeared sideways off the loo this afternoon.

I don't know what the other guys have been doing to that lavatory seat, but one of the anchors fell loose as I sat down, the seat went sideways, and my destination was very nearly a puddle on the floor.

That would have been a hard one to explain, trying to dry my bum off under the hand dryer ... and it wouldn't be the first time I've had to do that, but that's a story for another night!
* * * * *
Despite half the birthday cards not arriving from people who sent them - someone at the Watford Sorting Office must be having a birthday on my behalf - my birthday the other week was a pretty cool affair. No fuss, just a quiet drink with friends, taking in the good weather. But probably the best part is that it isn't quite over!

This morning, a present arrived in the post at work from my cousin and his fiancé. I had a feeling I knew what was coming, but not the specifics. Considering the time I've had at work these past couple of weeks, what they bought for me really made me chuckle: 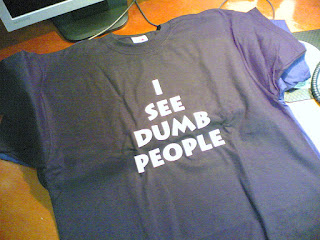 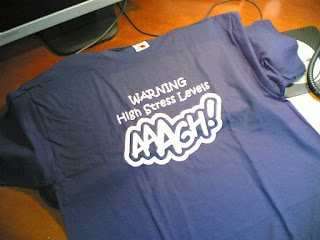 Shame I can't tell you just yet what I've bought him for his birthday!
birthday funny t-shirt Garfunkel present puddle Simon slapstick sliding away