May 04, 2008
I have to confess that since I arrived back from Egypt I haven't been particularly inclined to post any entries, hence the last couple of rather half-arsed posts!
So, I guess its about time to update you on the rather excellent time I had out there :-)
The whole purpose of the break was for my cousin and I to gain the PADI Open Water Diver certification, something that - at that time - I wasn't particularly interested in doing, but it was a break from work so why not?!
He had hoped to achieve his certification whilst on his honeymoon in the Maldives but despite numerous questions about what he would need, they neglected to inform him that he needed a medical because of his asthma.  Normally, this would not have been a problem as they have a doc out there.  Unfortunately for my cousin, the doc went on holiday the same day he landed in Kuredu!
Talk about bad timing.
So Egypt became the target with yours truly chosen as the buddy and accompanied by my cousin's wife and her friend.  So, four in total: Pygmie (my cousin), Shagwell (his wife), Classy Bird (the friend) and little ole me.
Part of my apprehension for undertaking the diving was because I have been scared of the sea since I was a kid, and would never go beyond waist height if I ever ventured in.  A few years ago, there was an opportunity to do a try-dive and I'm afraid I wussed out because of this fear.
Thanks to my cousin, I can say that the fear is now pretty much conquered and is more of a healthy respect for it  :-D
Arrival
The flight from Bristol, aboard XL Airlines, was roughly five hours and gave me an opportunity to go through my dive manual so that I had some level of heads-up prior to the course*.  As flights go, it was pretty standard: cramped and dull with a pack of food that succeeded in covering every temperature ranging from fridge cold to piping hot in something the size of an egg box.
As luck would have it I had a window seat, so there was an excellent view as we rose above the cloudy UK into gorgeous sunlight.  By the time we were flying over Africa, the sun had dropped below the horizon and we could see the neat layout of the resort lights as we came in to land.
It was sooooo nice to feel the warm air as we left the cool plane and know that for the next week, we could walk around in shorts and t-shirt in the middle of April.  We didn't realise that the UK was having a week of hot weather that week!
Getting through customs was quick and easy enough as we had a guy checking passports that seemed to be enjoying his job.  It was when we went to get the visas that we had our first experience of the things that were to come: everything was really hectic and they were rushing through two plane loads of people so people were a bit panicky, not sure what was going on and left with the feeling that something wasn't quite right.
Despite having a sign declaring that the visas cost USD15, they insisted that we had to pay GBP12.  According to Expedia, a single-entry visa costs GBP15, though if you compare this to the conversion table, we definitely paid more than we needed to.
Well, we were in Egypt and we weren't going to let that little debacle get to us, so we found the coach man and headed off to our hotel, the Tropicana Rosetta. 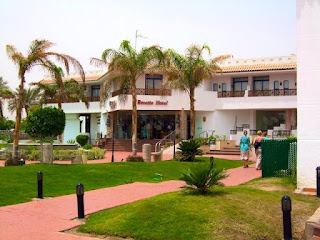 On the outside, this looked to be a very nice hotel: unfortunately, the rooms proved something of a disappointment.  Pygmie and Shagwell immediately had to change rooms because of a strong smell of damp and ended up in a room near reception where they could hear all the goings on all night, whilst Classy Bird and I ended up in rooms so far across the hotel's complex we were almost in another time zone.
At first glance, the room looked fine, but then the bathroom let it down with a shower head that was broken, a shower pole that was hanging loose, absolutely no hot water and air conditioning that sounded like a mad scientist's eccentric experiment.
Whilst I fixed the first two as best I could I had to make do with the cold shower and noisy air con, which actually proved to be no bad thing.
The one thing that really did make me uneasy was the lack of a room safe.  If you wanted to store any valuables then it had to be done at reception.  It wasn't until later in the week that I discovered that these were two-key lock boxes, by which time we had already gotten into the habit of locking everything in the suitcases whilst we weren't there.
So, all landed and settled in, we got our bearings by having a drink in the hotel bar - more of a counter at one side of reception than a bar of the kind I am generally more used to - and then to bed so that we could be properly rested for our first day of training...
* I don't know about you, but I always get more from a course if I have some level of knowledge about the subject before I go.
asthma Bristol classy bird course Egypt Maldives Open Water Diver PADI pygmie shagwell sharm el sheikh Tropicana Rosetta visas XL Airlines